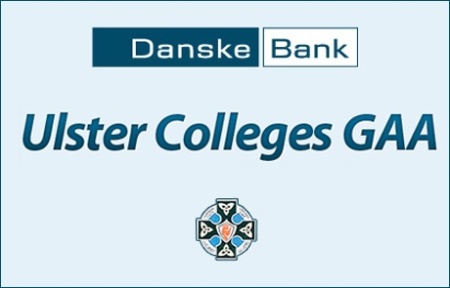 Holy Trinity secured their place in the MacLarnon Cup Quarter Finals with a hard earned win over Castleblaney at Dunmoyle on Friday. Castleblaney opened the scoring in the first minute, but playing with a strong win, Cookstown went on to dominate the opening exchanges with a Macauley Quinn point followed by a Gavin Goodfellow goal after ten minutes. Holy Trinity were in control of the contest and scores from James Lowe, David Mulgrew and Gavin Goodfellow, were followed by a great individual goal from Macauley Quinn to open an eight point lead. The Monaghan men responded with the last two scores of the half to leave the score line 2-4 to 0-4 at the break. Holy Trinity faced a strong wind in the second half, and although Macauley Quinn got the opening score of the half, it was Castleblaney who were on top, kicking five scores in a row to reduce the margin to just two points. Holy Trinity dug deep and managed to get crucial scores from Ryan Loughran and James Lowe, a late rally from Castleblaney was not enough, with a great Nathan Bell save ensuring that Holy Trinity held on for a place in the last eight, on a final score of 2-7 to 0-11. 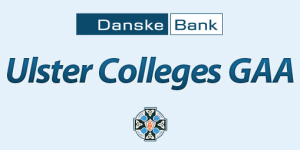 Holy Trinity College had an impressive win over local rivals St Pius X on Monday afternoon, to secure a MacLarnon cup playoff spot against Castleblaney later in the week. Second half goal doubles from James Lowe and Aidan Woods, secured the victory after an impressive first half, which saw them establish a thirteen point lead, with Gavin Goodfellow, and Cathoir Quinn the chief marksmen.  The final score finished 4-20 to 0-4 with Holy Trinity now facing the Monaghan men for a place in the last eight of the competition.

Well done to our Year 8s who took part in the Ulster Blitz at Garvaghey on Wednesday. All three teams played some great football with the ‘A’ squad unbeaten throughout. 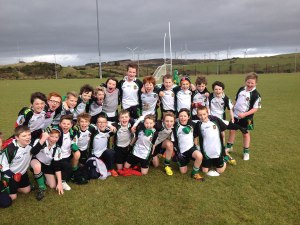 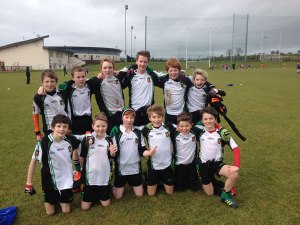 A massive well done to Michaela McGuigan who recently won an All Star award for her performances in the Green and Black of Holy Trinity College. Take a look at a short video of Michaela and you can see why she won the award. Well Done!

Holy Trinity College got their MacLarnon campaign up and running with a good win over St Mary’s CBS Belfast at Glen today. It was a must win game for the Cookstown boys after an opening day defeat to Letterkenny. Holy Trinity got off to the perfect start and it was Kevin Coney who found the net in the opening minutes to settle any nerves. The teams exchanged points in the opening period, with David Mulgrew, Macauly Quinn and Kieran Hughes the Cookstown marksmen.  Holy Trinity had opened a five point gap just before the break and a converted penalty from Ciaran Hughes left the half time score 2-7 to 0-5. With Holy Trinity well in control.  An early goal from Ciaran Hughes appeared to settled the contest , but two second half goals from St Mary’s offered them a way back into the game, however points from Hughes, Macauley Quinn and Conor Quinn, and a late Pauric Cunningham strike sealed the games in Holy Trinity’s favour. The final scoreline finished 3-13 to 2-11. Holy Trinity face St Pius X in their next group game, to be played next week. 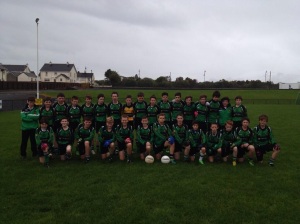 Holy Trinity College defeated Loreto College, Coleraine in the battle for top spot in group A of the Loch an Iuir on Monday. The Cookstown boys got off to a great start with a goal in the opening minutes from Rian McLernon and they dominated the first half, leading 2-4 to 0-2 at the interval. It was an excellent defensive performance from the Holy Trinity men, with Conor Donnelly, Cormac O’Neill and Aaron Moore, superbly backed up by Eunan Devlin and Noel Jackson. Second half goals from Adrian Burrow and Callum Holland finished the game as a contest, and despite a late rally from Loreto, the Holy Trinity boys held on for a final victory of 5-9 to 2-9. Both teams progress to the quarter finals, with Holy Trinity awaiting the outcome of other group games for their opponents to be confirmed

Holy Trinity College reached the Quarter Final stages of the Loch an Iuir with a 3-10 to 3-5 victory over Holy Cross Strabane. Holy Trinity played with a strong breeze in first half but it was the Strabane men who found the net in the opening minutes. Cookstown dominated the rest of half and goals from Mark Brady and Pauric Lagan seemed to put them into the driving seat. Another Strabane goal just before the break, left it all to play for at half time with Holy Trinity leading 2-5 2-1. Holy Trinity started well in the second half playing against a strong breeze and got a couple of great scores from Rian McLeronon and Eunan Devlin to kill the game off. A goal from Adrian Burrow stretched the lead further, and Holy Trinity held on for victory, despite a late Strabane penalty. this was a good team performance with some great second half defending from Conor Donnelly and Kieran Nugent who were superb throughout. The victory puts Holy Trinity into the quarter final stages, and they now face Loreto Coleraine next Monday, in the final group match to determine top spot in the group.
The Holy Trinity scores were Rian McClearnon (0-4), Mark Brady (1-1),Adrain Burrow (1-1) Pauric Lagan (1-1), Aaron Moore (0-2), Eunan Devlin (0-1).